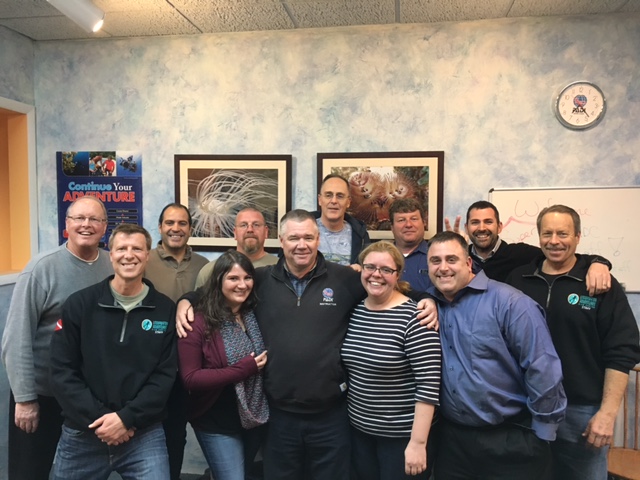 Below please find our instructional staff.  Each has a passion for diving and for teaching others about the wonders of scuba.  Come in and meet us!

Paul formed Underwater Adventures in 2007 so that he could provide great experiences for his customers and share his passion for scuba diving and teaching.  Paul worked as an insurance underwriting manager for 20 years before deciding to use his skills in a business that can thrill and delight so many people.

Multi-faceted and multi-talented, Liz is a regular around the dive shop.  When she's not at UADC, she's busy writing children's books and articles, volunteering as a Dive Team Leader at the NY Aquarium, and teaching children's literature and writing & technology to college students. Liz is passionate about ocean conservation and environmental education.

Neil has dived and traveled extensively during his dive career.  An avid naturalist, rumor has it that he keeps extensive log of all the creatures he encounters in his travels.  Neil is also a volunteer Dive Team Leader at the NY Aquarium, and is now back in school as he works towards a career in wildlife/environmental conservation.

Mike’s background in training and development is a logical fit for his activities as a PADI Instructor.  His day job often sends him to conduct workshops around the world, and he has taken advantage of enjoying the local diving in places such as Thailand, Indonesia, Egypt and Brazil.  Mike also enjoys diving the wrecks off the coast of New Jersey.  “My wife likes it when I bring home dinner!”  Lobster is the usual target.

Ed began his underwater adventure in 1961, free diving in the waters around Brooklyn.  Realizing that you can’t dive deeper using a garden hose as a snorkel; Ed yearned for some scuba gear…  Years later… After enjoying various levels of dive training; Ed now enjoys diving and teaching recreational scuba and spreading the excitement and wonder of the amazing world beneath the waves.  Some friends refer to Ed as the Octopus Whisperer.

Ramunas, affectionately known as ‘Ramas’ by anyone with sufficient courage, is ‘The Most Competent Man In The World’.  A result of genetic engineering experiments in the former Soviet Union, Ramas possesses superhuman strength, feels no pain, and is able to fix any mechanical object just by staring at it.  In the water, Ramas displays a preternatural calm and competence.  When Ramas submerges, Ramas does not get wet; the water gets Ramas.  Ramas is immune to the bends.  “Hey – you know – nitrogen is just a gas…  Soft.  I crush it,” says Ramas.

Tommy is a retired Newark Firefighter and a Public Safety Dive Instructor. Tommy has been diving for 15 years between Sport Diving and Public Safety diving.  He also enjoys Wreck Diving here along the New Jersey Coast. He enjoys teaching at Underwater Adventures to help insure that students have a safe, enjoyable diving adventure and guiding them through an amazing new world of diving.

Rob Morris is The Most Interesting Man In The World.  As a young man, he spent three years riding his bicycle around the world, leading to an appearance on the TV program, To Tell The Truth.  Interestingly, several international incidents of great intrigue occurred in countries at the time Rob was pedaling through, leading to speculation that Rob was under contract with the CIA.  Rob does not talk about this.  Rob loves to tie knots and splice line and is in the habit of offering people his useful creations.   Rob loves sharing his passion for diving, making him a gifted instructor.  "Stay wet my friend", says Rob.

Anne first became a certified SSI diver many years ago through her high school SCUBA club and after a surface interval that lasted far too long, she recertified with PADI while on a Fulbright Fellowship in Timor-Leste.  She continued her SCUBA education in Southeast Asia and became a PADI instructor in 2018. Aside from teaching SCUBA, Anne is a labor and employment attorney for a Sussex County-based law firm and enjoys exploring new dive sites around the world whenever she can!  Please tell Anne when you see her that she will need more than a 3-mm shorty to dive in the Northeast.

Bridget became a PADI certified diver in 2001.  The class was her high school graduation gift.  She then went on to study Marine Science and got into the New Jersey shore diving scene. Later, Bridget dived in locations that don’t include Raja Ampat, Lake Baikal, and the Arctic Circle.  Instead, she flew around the world for her job with an airline and later joined Underwater Adventures to work in the store. She completed her PADI Divemaster certification in 2012, AI in 2015, and now joins the ranks of Instructor having completed her Instructor-level training in 2018.  In her spare time, Bridget is a Roller Derby Queen, skating under the moniker “Sandy Hook-Her”.

Chris is one of the most interesting people you will likely meet.  In addition to his interest in diving, Chris has a wealth of knowledge on just about any topic having to do with sports, entertainment, or heavy metal.  His body is literally a work of art, which is obvious to anyone taking a class with him.  And he rides a Harley.

Chris did six resort dives with his wife over the years until his wife finally signed them up to get certified while in the Bahamas in 2007.  Since then, he is sure there are times when his wife must question that decision, because almost every weekend during the diving season he is in the water rather than at home mowing grass and doing chores. Chris is now a IDC Staff Instructor and teaches many specialties.  In addition, he is certified as a PADI Tec Gas Blender, PSI Tank Inspector and Scubapro and Cressi regulator technician. He has been lucky enough to dive many places around the world.  However, as the saying goes, there is no place like home, and his favorite place to dive is the wrecks off the New Jersey coast.

Scott has been diving and teaching at UADC for the past 4 years, and comes with specialty experience in wreck and cave diving.  He is never without his precious drysuit, as he doesn't like to get wet when he dives.

Brian began his dive training with UADC by taking the Open Water and Advanced Open water classes in July of 2010. During the next 18 months he received his Rescue certification and 9 others including PADI Master Scuba Diver.  Brian recently logged his 100th dive.  His business profession is an IT Director, and when not diving he enjoys golf and kickboxing.

Lucas wandered into Underwater Adventure Dive Center in 2010 and has since worn a spot in the couch.  It was a good run, but in 2021 he was told, “either pull your own weight or pay rent”.  Because all his money was going towards diving gear, he decided to get certified as a Dive Master in 2021.  Lucas enjoys blowing bubbles any chance he can get.  Some of his favorite spots include Grenada and Dutch Springs.  When he’s not diving, he enjoys spending time with his family and cooking.

Known as Phil to students and Wrong-way Corrigan by the staff, was looking for the next adrenaline high when his father recommended he get certified as a scuba diver back in 2012. He came to UADC for his Rescue Diver certification in 2015 and never left. He received his Divemaster certification in 2019. His favorite place to dive is the NJ coast, and while most complain about the low visibility, he maintains that it just makes every other dive where the visibility is 5+ feet that much better. It is also rumored that this is why he steers away from pool sessions, visibility is just too perfect and he has no excuse for going the wrong direction when using a compass.

Became a DM in 2015, Greg enjoys a wide range of diving, including local dives off the NJ coast.   Don't let the beard fool you, he is only a part-time hockey player.